The Traditional Cycle Polo is played on grass field that is rectangle, which by some standards has to be with some official dimension, but on the other hand any field which is big enough is ok. These dimensions can vary between 150 meters in length to 100 meters in width. Cycle polo players play the game using a ball approximately 2.5 inches in diameter, while the mallet has to be 1 meter long.

Play the most exciting bike games in the world for free. 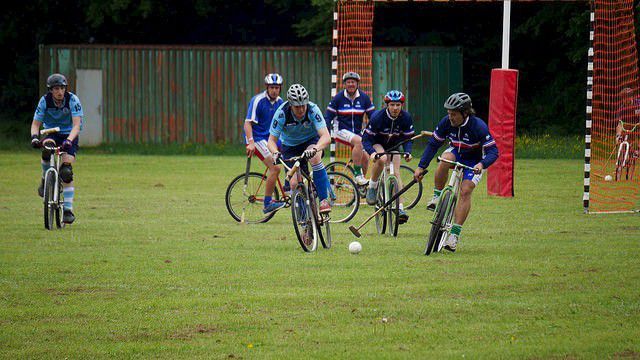 Depending on the country the number of players in each team differs. For example there are 7 members in France on a team of which 5 are on field at a time. The other two are waiting for their turn and are used as substitute. Each match has duration of 30 minutes, but if the score is tie at normal time then additional time can be added.

Lately an alternate form of the Traditional Cycle Polo has grown in popularity. It is called Hardcourt Bike Polo and the rules also vary by the city or the country. Basically, it can be played on any surface available, like tennis courts or street hockey rinks. Accept the Adrenaline Challenge and win!

The Hardcourt Bike Polo is slightly faster than the traditional game. Each team has three members and there are no substitutions. This game is played simply by using a street hockey ball. Each match lasts as long as it is required for one of the teams to score 5 points or before the time runs out.